Check your email from your team manager for the zoom id to attend!

WBLHA Board Meeting Coming up Monday

Email Sally Lichter for the zoom link to attend.

Catching up with our 2020-21 Warren Ladies at Bootcamp!

Click here to email Mrs. Dunnigan with any questions about Bootcamp

Warren Hockey Spirit Wear orders will be available at practices after Oct. 5th

Calling all Warren Goalies! Check the calendar for your regularly scheduled Goalie Clinics!

As some of you might have heard, we are excited to partner with Roy Perfetti of P.A.D.S. School of Goaltending.

Roy Started his company back in 2009 and has worked with many of the the clubs and schools in our area.

P.A.D.S. takes a personal approach to their teaching and concentrates on game prep, positioning and game situations.

To find out more - visit padsgoaltending.com ! 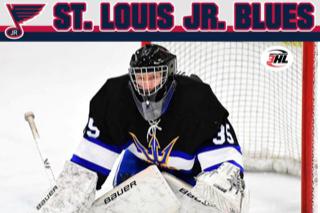 Congratulations to Sr. Goaltender, Ben Winkler who has officially signed with the St. Louis Jr. Blues of the NA3HL for the 2020-2021 season. Ben finished the 2019-2020 season for the Blue Devils Varsity team with a .915 save %, 2.00 GAA and a record of 14-7-1. “Ben is a hard-working, talented netminder who was a big part of our success this past season. Ben executed in crucial games, helping our team to finish 1st in the IHSHL North Central – Champions Division. Our coaching staff is excited for him to take this step to the junior ranks and are confident that he will be a key component of the Jr. Blues’ success in 20-21 campaign.” said Varsity Coach, Doug Placko.

We wish Ben all the best in St. Louis and look forward to watching his successes this season and beyond!

Congratulations to our Warren Ladies selected to the 2020 Metro Girls Jamboree!! Way to go Warren! #Bleedblue 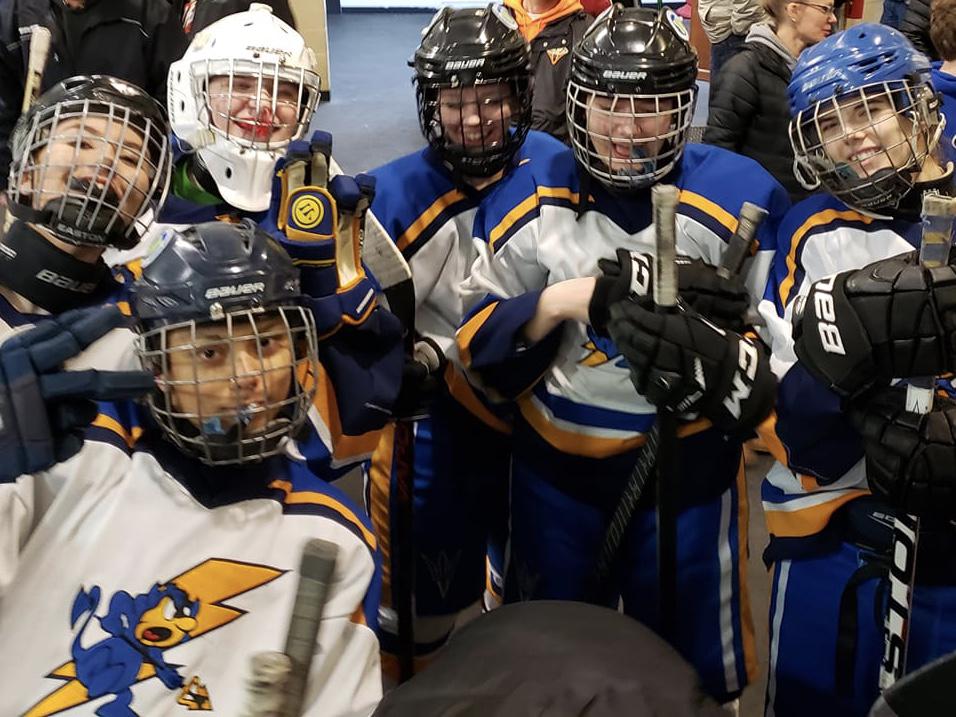 Warren Ladies took it to Canada for some great hockey and a great road trip! Congrats Ladies! #WarrenProud #BleedBlue (Jan-20)

Lots of great games lined up this weekend for Teacher Appreciation Nights! Come for the hockey and to help our players celebrate their Warren teachers!

Congrats to our 2020 IHSHL All-Stars. "The players, families and our organization should be both excited and proud!" - Warren Hockey Director Scott Makway

Happy Holidays to all our Families, Friends and Fans !

Click *HERE* to watch all the action via HockeyTV.com

Coach Manny and the Warren Ladies were highlighted in AHAI News!

Great event for a great cause! Way to go Warren! #BleedBlue (Nov-19)

Looking forward to another great tournament! Find all the info here for Prep Tournament Nov29-Dec1

THE TOURNAMENT WILL BE HOSTING A FOOD DRIVE.

BE SURE TO BRING NON-PERISHABLES WHICH WILL BE DONATED TO A LOCAL FOOD PANTRY.

Note: Games times were changed on 11/25 - below are the updated schedules

Men's JV left it all on the ice to bring home the Championship Banner from Mad-City!

We’re ready for Madison! Is Madison ready for Warren !! (Oct-19)

Keep that great Warren Spirit Ladies - your Warren Hockey family is rooting for you! (Oct-19)

The only thing better than hockey - is sharing our love of hockey with others! #WarrenProud

Wednesday Oct.16 is Mod Pizza day! Get yourself to Mod Pizza and support Warren Hockey! 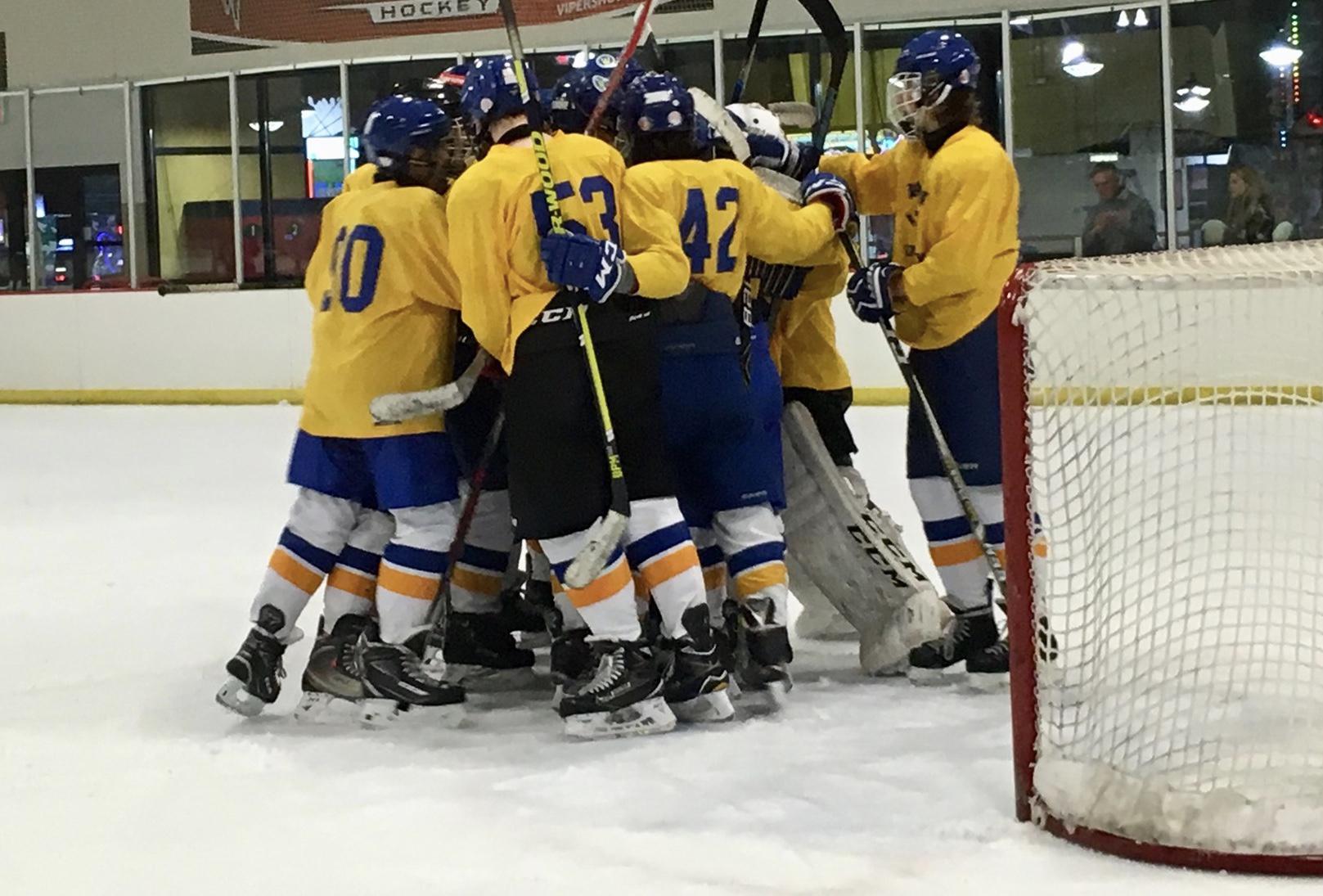 Warren Ladies know how to work hard and play hard!

Gator Cup schedule is posted to the Calendars.

Note: there are two rinks being used. Check your location carefully.

If you want to see all the teams and the seeding schedule for Sunday - click the link below.

Best of luck to all the players during try-outs!

Great to see all the teams out there. Looking forward to home openers in October! (Aug-19)

Hope all of our Warren Blue Devil Hockey Players, Coaches, Families, Friends and Fans are having a great summer. 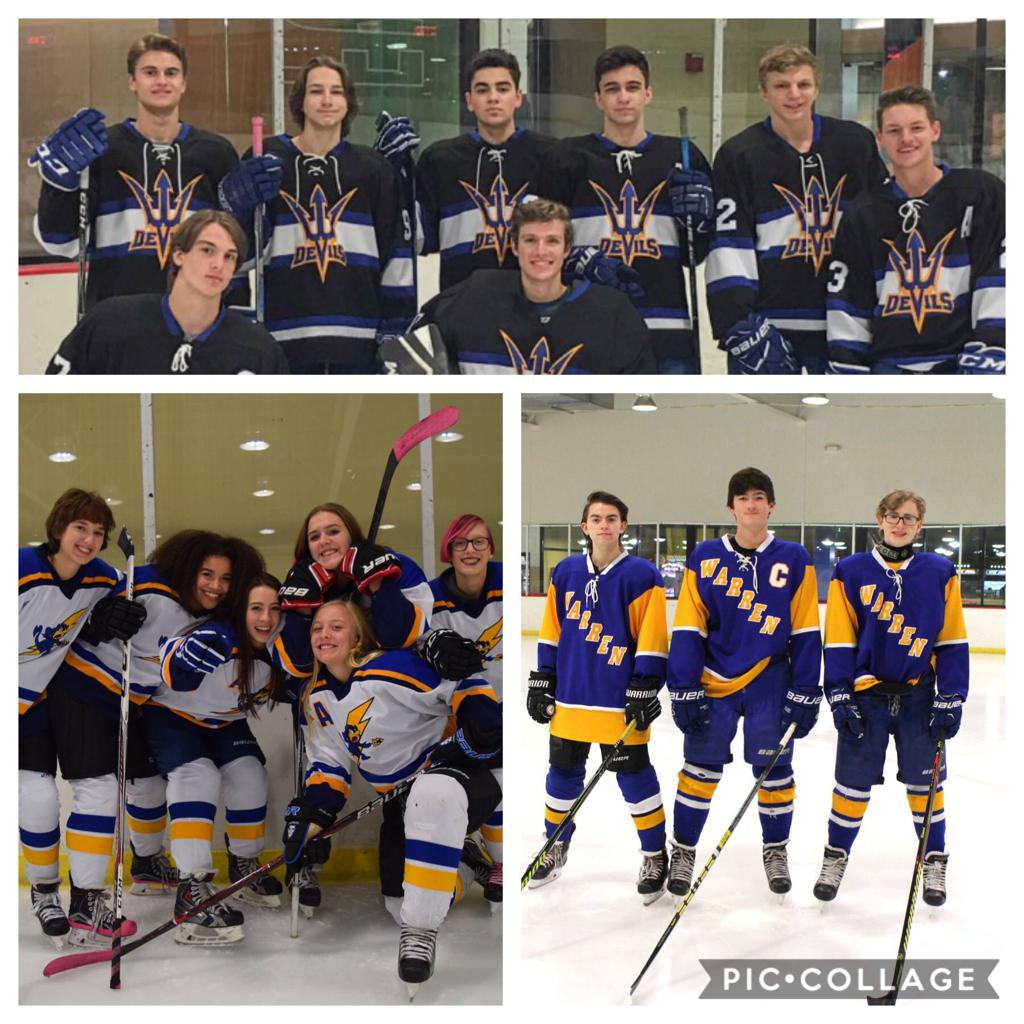 Congratulations on your graduation 2019 Warren Hockey Seniors. You'll all be missed! Make sure we still - see you at the rink !!

Thank you Players, Coaches, Board Members and Parents for another great Warren Hockey season! 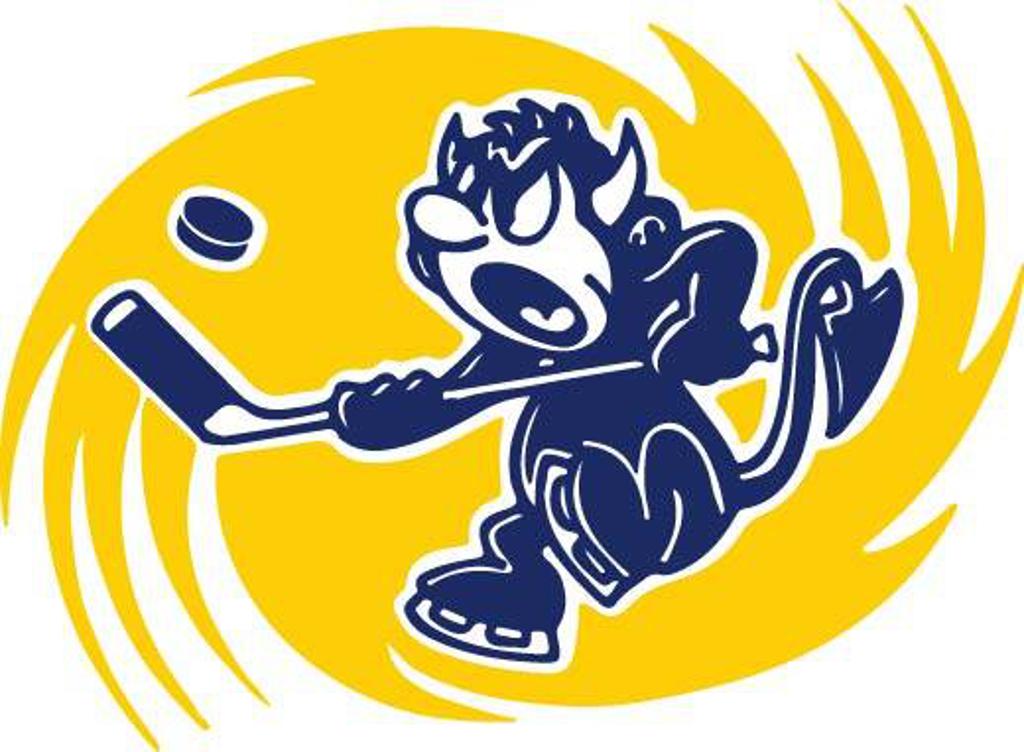 Hockey is where we live. Life is what happens in between games.

It was a fun double header with both JV and Men’s Varsity playing at home Saturday night. *Photos by Bob Townsend-Hockey Shots Photography* Thanks Mr. Townsend! (Apr-19) 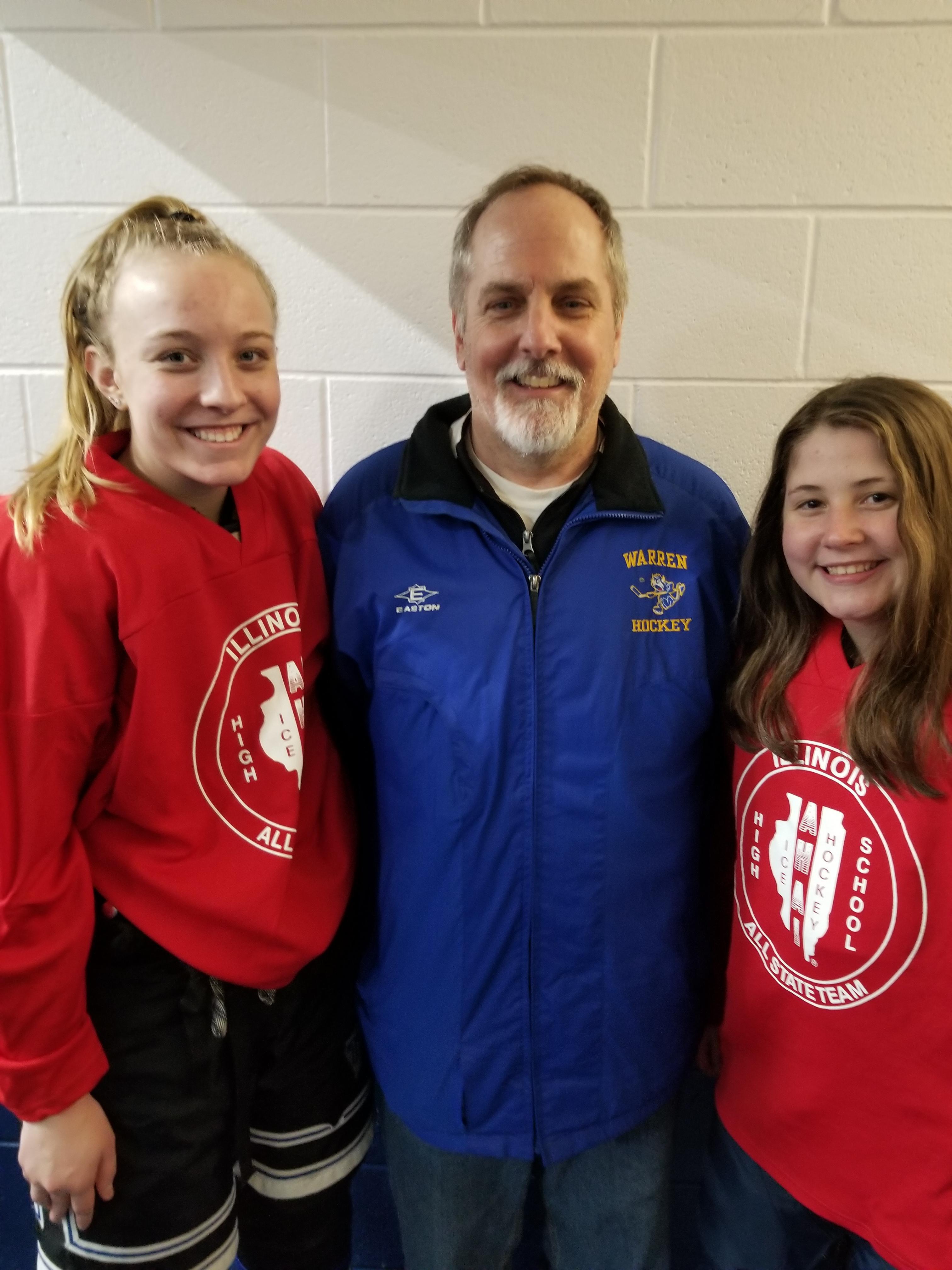 Jordan Moore, Coach Manny and Michelle Byker at All State Game on Monday 2/11/19

Ryan Anderson has announced to the Warren Blue Line Hockey Association Board that he will not be returning as Director of Hockey Operations and Head Coach effective at the conclusion of the 2018-2019 season. Coach Anderson expressed his desire to focus on his growing family and his new job in school administration saying in a letter to the families and the board, “For the past seven years, Warren Hockey has been a major part of my life; it quite possibly defined who I was during my years at WTHS among school administration, faculty, and the student body. At the current time, with my transition into school administration and my growing family at home, I do not believe it right for me to stay on in my current role. I want the program to be best suited to handle any upcoming challenges and for the board to put a person in place that can dedicate themselves to a level the program needs.”

The Board and the Warren Hockey family would like to thank Coach Anderson for seven great seasons and the devotion to his students and players. For the last several years Coach Anderson has been the face of Warren Hockey to our families and with the students at Warren Township High School. Coach Anderson leaves a legacy of developing his players as students, players and men. We express our greatest gratitude for his service to the organization and hope that he will continue to contribute to the program in the coming seasons.

Coach Placko came to Warren Hockey after spending 5 seasons with the Winter Club of Lake Forest at the Squirt, Peewee and Bantam levels. As an USA Hockey Level 4 coach, Doug's coaching/leadership style stresses the importance of developing individual skill, while at the same time emphasizing team concepts that lead to team success at both ends of the rink. Committed to developing well-rounded student athletes, Doug makes it a priority to help his players achieve their goals and prepare for the "next level" on and off of the ice.

Doug has spent the last 2 seasons as the head coach of the Warren Hockey JV team and is very excited to step up to the Varsity level where he can draw on both his playing and coaching experience to continue to develop the Blue Devils players & program.  “The Blue Devils Organization is first class and we have a highly skilled Varsity team. I look forward to transitioning to the Varsity team in the spring and Fall seasons with a focus of bringing a State Championship banner to Warren. I would like to thank the Board for the opportunity, as well as players and parents for their continued support.”

“Our coaching staff throughout the organization is very strong and we are fortunate to be able to promote from within” commented Scott Makway, Warren Hockey Director.  “There is already a relationship between Doug and our players which will be a huge benefit as we move into the next season”

A native of Grayslake, IL, Doug grew up playing NIHL/CSDHL youth hockey for the Highland Park Falcons & Barrington Redwings. After high school, he played junior hockey with the Cleveland Jr. Lumberjacks of the NA3HL before playing college hockey at Saint Mary's University in Winona, Mn.
Doug resides in Grayslake, IL with his wife (Taryn), Son (Connor).

The Board is actively interviewing candidates to lead the JV Men’s squad and will be naming a replacement soon.

Who has committed to St. Norbert’s College and was featured in the AHAI news!

Great job Jordan! We wish you the best in pursuit of your academic advancement and College Hockey.

Congratulations to the players selected for the IHSHL All Star Games!

Great to have these guys as the shooters at our Goalie Clinic last night. Alumni players Stefan and Collin. 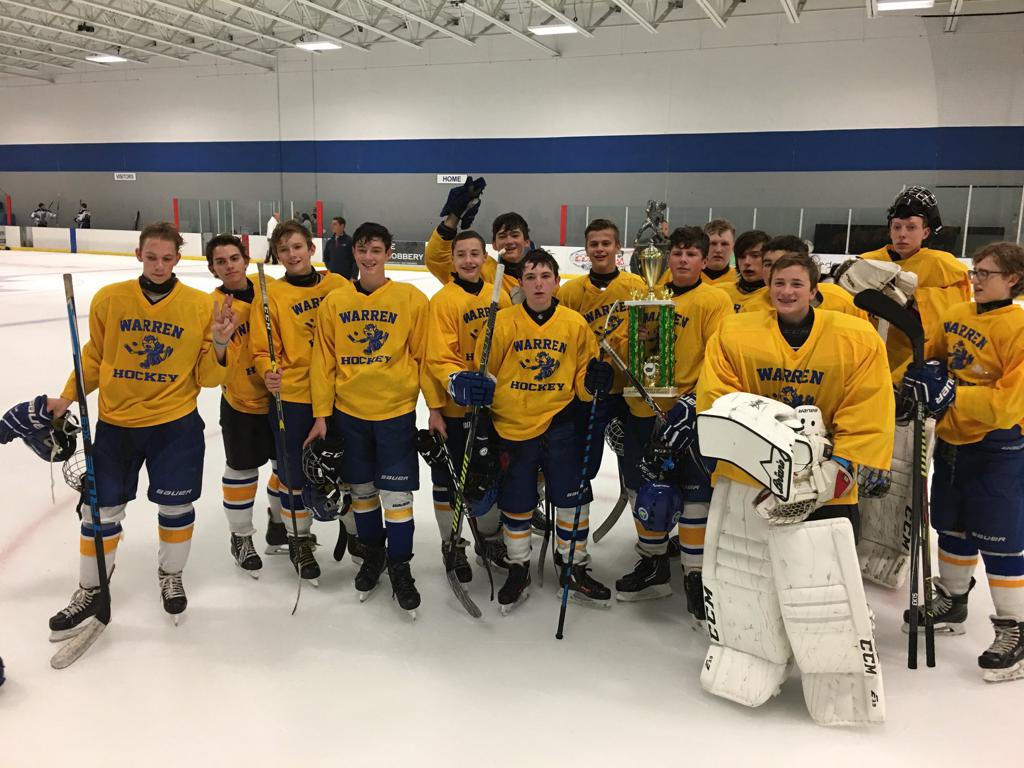 Congratulations to the JV team for coming in 2nd place in the Gator Cup Tournament. What a great way to start the season!

A portion of your purchases will be donated to Warren Hockey.  Just click the Amazon Smile above and shop.  Thanks for your support Warren Hockey Fans!

Warren Hockey is pleased to partner with P.A.D.S. Goaltending

USA Women's Gold game is on! 1st period over, no score...yet!🇺🇸

Ladies Registration for Spring is now up! Please complete registration ASAP as we need to have completed and approv… https://t.co/SZQwiDhfdy

Warren Ladies had a successful recruit skate tonight! Thank you to all the ladies who came out and participated. 💙💛🏒💙💛

Tonight's the recruit skate! Let's get the word out! Warren Ladies are looking for new players for spring and next… https://t.co/JCnPLc9N28

Senior Alexis Schultz and RMU Commit went to the Robert Morris recruit skate and suited up for the first time as an… https://t.co/usOve1Miho

Warren hockey calling all ladies out there! You got this!!!!! https://t.co/kwEJX3TqoJ https://t.co/yukomGCIk1

Thanks Triebe family! Last night was such a fun end of the year party! #WarrenLadies

Great Parent/Sibling Game! Huge thanks to everyone who came out and participated! It was such a fun game! 💙💛💙💛

Thank you to everyone who came out in support of our graduating Senior players. We wish them all well as they prepare for graduation and embark on their new journeys, wherever it may take them.